Hong Kong might not be the first place that comes to mind when planning a scuba diving trip, but you might be missing out. In fact, Hong Kong is home to over 90 species of coral – that is more than the entire Caribbean combined – and at least 300 species of fish. It’s not quite Raja Ampat, but given ongoing travel restrictions, we’ll take it!

To learn a little bit more about Hong Kong’s underwater world, I caught up with Darren Gilkison, owner of Splash Scuba school in Sai Kung, and Jonathan Cybulski, a University of Hong Kong PhD candidate and historical and marine ecologist who has been studying Hong Kong’s coral for the past four years.

“The sheer volume of coral in Hong Kong is astounding to me as a scientist,” says Cybulski, who is also a National Geographic Explorer. “You have one of the most densely populated places on earth but, just 30 minutes on a train, you can hit the water and see corals – it’s like picturing coral growing in Manhattan.”

How good is scuba diving in Hong Kong?

If you are anticipating 40-metre visibility like you’d get in the Maldives or Indonesia, Gilkison recommends tempering expectations. But still, you will likely be pleasantly surprised by the experience.

“There’s a heck of a lot more to see than one would think. And the volume and size of fish are improving, due to the trawling ban that came into effect in 2012,” says Gilkison, who has been running Splash for roughly 14 years. “For sure the visibility varies, but this year it’s been particularly good [possibly due to reduced marine traffic and pollution].”

Cybulski seconds that. On a good day, you can see up to 10 metres. On an exceptional day, maybe even 20, he says. “Anything up in Mirs Bay, Port Shelter, Sai Kung area – that is where you are going to see the most marine biodiversity as well as nicer, cleaner water,” says the academic.

What kind of marine life can we see in Sai Kung?

In the past few months alone, Gilkison says he has had several incredible experiences while scuba diving. Just recently, he encountered a  huge school of mackerel. On another dive, he saw several rays gliding through the water.

“This year we’ve seen more frogfishes, blue-ring octopus, crabs, clownfish, demoiselles, scorpionfish – and I saw the biggest sweetlips I’ve ever seen in Hong Kong the other day. It must have been a good metre long,” he says. “You also see a lot of nudibranchs [a shell-less mollusc]. I saw one on the side of a wreck that was the size of a hand!”

Where are the best dive spots in Hong Kong?

For accessible coral sightings, Cybulski recommends heading to Hoi Ha Wan Marine Park, which is home to more than 60 coral and 120 fish species. “Corals are like underwater forests. You have different branches, shrubs, shapes – and here in Hong Kong, we tend to get massive corals in brain-shaped globes,” says Cybulski. “They are slow-growing coral, which can survive better than more fragile, fast-growing coral [due to the water and temperature conditions].”

And where you find coral, you will most likely find marine life. “More than 25 percent of all marine biodiversity relies on coral reefs for some stage of their life for survival,” says Cybulski. “While diving, I have seen cuttlefish, sea urchins, jellyfish, octopus, snails, gorgonians [a type of soft coral], nudibranchs, sea fans, and tons of sea anemone and clownfish – there are lots of ‘Finding Nemo’ scenes in Hong Kong.”

How can we dive responsibly?

“The No. 1 rule of diving? Do not touch anything. That is one of the keys to protecting marine life and protecting yourself and the habitat,” says Cybulski. “It’s also important to remember that corals are really fragile animals and you can do serious damage if you touch or accidentally kick one.”

The beauty of becoming a scuba diver, he continues, is that you gain so much more respect for the marine environment, animals and the ocean. “You will start to see the human impact on the environment and want to be part of the change – maybe even questioning the overall sustainability of your life in Hong Kong.”

Another way to champion our marine environment, says Gilkison, is to support coral research and restoration projects, such as the Hong Kong Artificial Reef Project, the Coral Transplant Project, or the Coral Monitoring Quan Cai group.

What’s the best time to scuba dive in Hong Kong?

The optimal seasons are late summer to early autumn (August through October), or late winter to early summer (February to July). “The summer can be windy and choppy, though we can still find sheltered bays that are great for diving,” says Gilkison. “The water clears up as the seasons change, and we get some really nice conditions. And right now, it is particularly beautiful.”

Grounded due to COVID-19? Check out this luxury mountain yoga retreat, right here in Hong Kong. 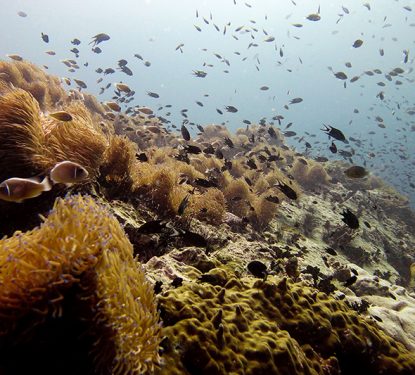 Have you ever noticed how hypnotic fish tanks are? There’s...