In celebration of the Ghenghis Khan Festival’s 10th anniversary, Liv Magazine is giving away four free race entries! Take your pick from the various races taking place at the event, from the MTB, the marathon, half-marathon, or the entire King of the Grassland competition. Enter via our giveaways page on our website: liv-magazine.com/giveaways. 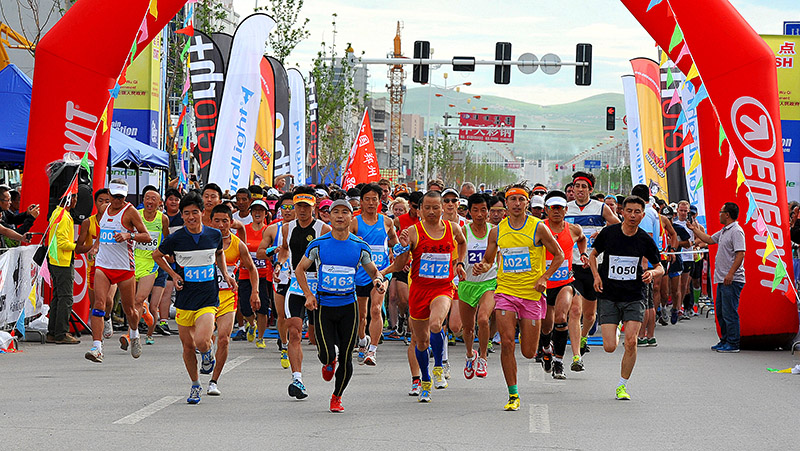 In early July, all of China’s cycling and running communities will be gearing up for the 10th anniversary edition of the Genghis Khan Festival. The event is set in and around the lush green grasslands of Xiwuqi, a remote town 150 kilometres north of regional center Xilinhot in Inner Mongolia. It consists of a Grassland Marathon & Half Marathon run and a three-day mountain bike stage race. Over the years the race has become a genuine cult event in China, and this summer, close to 2,000 participants – runners, bikers, adventurers and Mongolian culture enthusiasts from more than 40 countries – will once again travel to Xiwuqi to enjoy a long weekend of sports, culture and fun.

The first Genghis Khan MTB Adventure took place in 2007 while the Grassland Marathon run had its inaugural edition the previous year. Nordic Ways, a Swedish-Chinese company based in Beijing organised the event alongside the local authorities and set the benchmark for all other event organisers in China. It wasn’t until a few years later, though, that participant numbers began to boom as the region’s traffic infrastructure improved (the bus ride from the airstrip in Xilinhot to Xiwuqi used to take five gruelling hours on a very bumpy dirt road). More significantly perhaps, Chinese citizens began to embrace leisure sports at the beginning of this decade. In line with these developments, the event’s race programme was also redesigned and since then the Genghis Khan Festival has been a sell-out year after year. 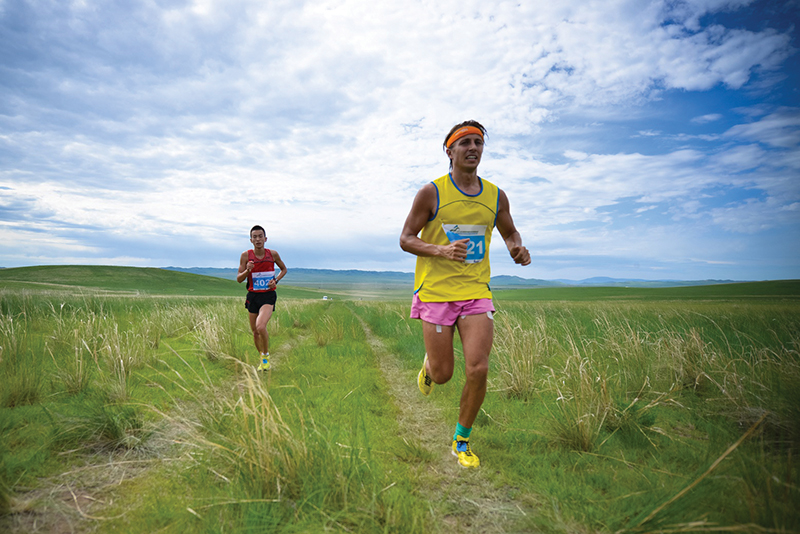 “Seeing how the event has grown over the last few years, and especially seeing so many local people here in Xiwuqi and neighbouring towns who have taken up sport is just fantastic”, says Niclas Hellqvist, managing director of Nordic Ways. “We are confident that we can continue for another ten years, and who knows, maybe we even get to see a local athlete winning the marathon or the mountain bike race one day”.

Considered to have been the most powerful conqueror of the ancient human world, many legends of the Mongolian emperor Genghis Khan are still passed on today. One of the stories is set in Xiwuqi, the marathon’s host town. When Genghis Khan crossed the Gobi Desert, he lost two of his best and most beloved horses. The emperor was so furious he destroyed all settlements he came across, desperately looking for his steeds. When he came across the grasslands of Xiwuqi and climbed a hill to overlook the valley, he suddenly saw his two horses grazing near the river Qiduer. Genghis Khan was so relieved he renamed the hill he was standing on after his two horses: Siriguleng and Halagatu. This famous hill, 25 kilometres away from Xiwuqi, is now a tourist hotspot and overlooks a beautiful valley with over 100 square kilometres of untouched grassland. Mountain bikers will pass the statue of the two horses on their first day of racing. 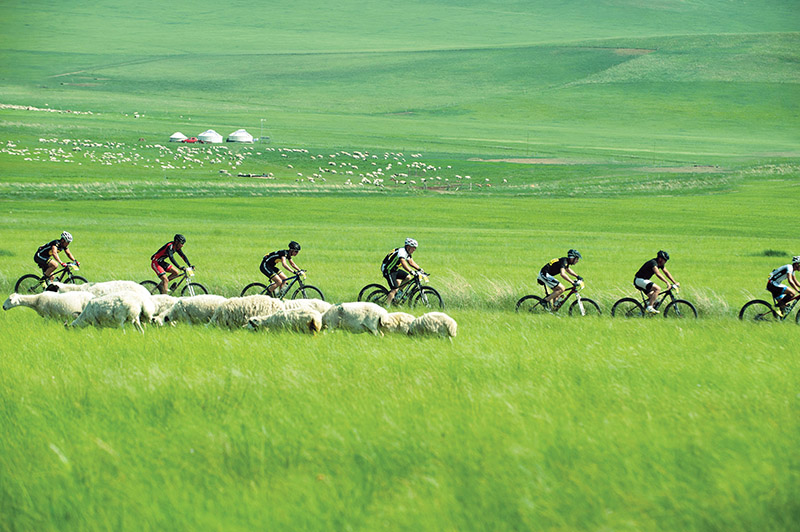 Xiwuqi, which is sometimes more elaborately referred to as West Ujimqin Banner, has about 60,000 inhabitants. The majority of its citizens are still ethnic Mongolian. Everywhere you go, you hear people speaking Mongolian and the traditional Mongolian script is omnipresent next to the Chinese characters. On Saturday night, the event organisers lay emphasis on the local minority culture during the official banquet dinner and outdoor bonfire party inside the grassland. Dubbed “Grassland Crazy Night”, it is definitely a highlight of the weekend for a lot of people, and more than one mountainbiker has failed to get out of bed the next day for the start of the last stage on Sunday morning!

Amazingly yet tellingly, some people have participated every summer since 2007. Wang Lidong from the northern Chinese province of Heilongjiang has made the Genghis Khan Festival his annual pilgrimage to the grasslands of Inner Mongolia.

He recalls: “First I came because it was the first ever MTB stage race in China, but nowadays it is the beautiful scenery and also the delicious local food that keeps attracting me. Though modest, Wang Lidong is a serious competitor. In 2013 and 2014 he even became the King of the Grassland, a competition that combines the MTB race with the marathon run.

The KOG, as it is commonly known was an innovation that was officially launched three years ago following the sudden popularity of ultrarunning and other extreme adventure challenges in China.But the organisers never thought that so many people would attempt it. This year there may be up to 200 athletes, including many women, riding all three long distance stages of the MTB and running the full marathon in between. It does however remain an enormous physical and mental accomplishment. Last season, just 68 percent of the KOG competitors made it to the finish line. 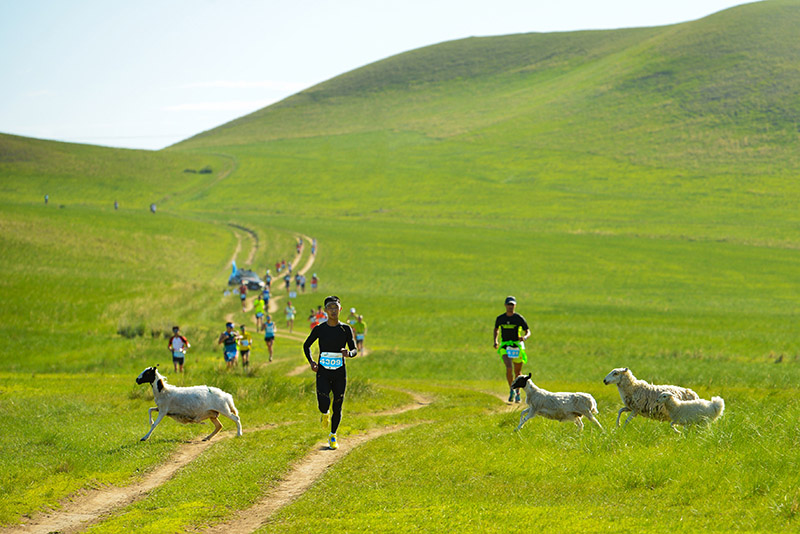 The organizers recommend that participants from Hong Kong get to Xilinhot via Beijing. Take one of many flights from Hong Kong to Beijing, and from there you can connect on Air China to Xilinhot. There’s also an official event bus from Beijing’s Jiandemen Station that goes straight to the Xiwuqi grasslands. It’s an eight- to nine-hour ride, but it’s a lot more convenient than it sounds.