Winding around the forested hillsides of western Slovenia, my husband and I have the roads all to ourselves – a good thing, since we keep stopping abruptly to admire the views. A dramatic valley stretches below and the Julian Alps rise in the distance. In the centre of the scene, the Soča River swirls through the valley, so icy blue it gives me goosebumps. 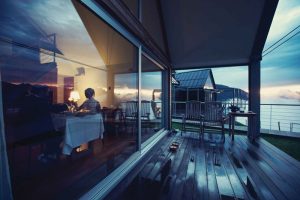 We’ve just begun a road trip through the Soča Valley, about two hours northwest of Slovenia’s capital of Ljubljana, and we’re already thinking up ways to permanently relocate. Why here? For starters, it’s one of the greenest places on earth. Slovenia was named the world’s fifth greenest country by Yale University last year. And back in 2008, the Soča Valley was named a European Destination of Excellence (EDEN), a nod to its eco preservation and sustainable tourism development. The set of 2008’s Narnia (Prince Caspian edition), the peaceful valley is teeming with natural wonders, from the Boka Waterfall (the country’s tallest) to the Triglav National Park, Great Soča Gorge, and snow-capped Julian Alps (a UNESCO Biosphere Reserve). 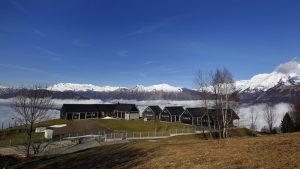 There are no international hotels or highways – just quaint agritourism guesthouses and a few upscale chalets to choose from. It’s the kind of place that rises with the sun and has been doing “farm-to-table” dining long before urbanites took to the trend.

It’s next to impossible to explore the area’s narrow roads and hairpin turns in anything but a little hatchback – so that’s just what we did. But first, we unpacked our bags at Chalets Nebesa (meaning “heaven” in Slovenian). Hidden away up on a hill overlooking the town of Kobarid, the family-run property provides four private cottages overlooking the entire area, as well as extensive sauna facilities, complimentary local snacks, and a cellar full of local wine.

“The Soča Valley is the best place to experience the Slovenian countryside, with its agricultural heritage, hay bales, cows, and farm houses,” says Katja Roš, who runs Chalets Nebesa with her husband.

Close to town, we follow the Kobarid Historical Trail, which runs alongside the impossibly turquoise Soča River, inside the Great Soča Gorge. A path veering off to the right leads us to a series of wooden planks and stepping stones that dot the river bank. The stones lead to a walking path, hugging the canyon wall. As we trace the craggy rock face, we hear a rumble and feel a mist. Then the waterfall comes into view. The Kozjak Waterfall is not the country’s highest – that title goes to the 144-metre Boka Waterfall in the nearby town of Bovec – but the oft-empty cavern provides a few moments of solitude. 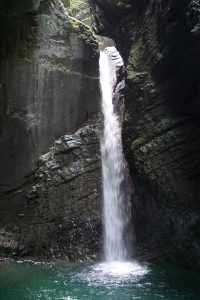 Drawing from the natural bounty, the region is also known for its food – fresh cheese from nearby Tolmin village, homemade nettle ravioli, and grilled river trout make an appearance at nearly every meal. These local ingredients have paved the way for more contemporary restaurants to thrive too. Hisa Franko, helmed by chef Ana Roš (recently crowned the World’s Best Female Chef), is one of the biggest success stories.The award-winning restaurant charms diners with its homey atmosphere, down-to-earth staff, and whimsical surprises (like fermented cheese lollipops and sourdough made from fermented apple peels). Roš works with a mix of local purveyors, from mushroom foragers to cheesemongers – and her husband Valter Kramar is an established sommelier with a penchant for collecting lesser-known Slovenian varieties. 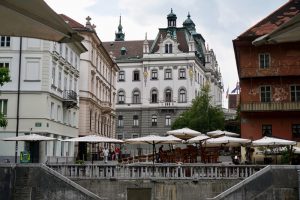 The food alone is worth a road trip, but the journey isn’t complete without visiting the Julian Alps. “The most scenic drive starts in the valley and traces the Soča River, through the Julian Alps, following the 50 hairpin turns of the Vršič Pass,” says Katja Roš (who happens to be chef Ana’s mother). “You will want to stop at least 10 times to see the amazing scenery, the emerald colour of the Soča river – its pools, waterfalls, canyons… the drive is an experience in itself.”

She’s right – it’s a slow, photogenic ascent, the roads hugged by trees with viewpoints every few kilometres. Up in the mountains, all part of Triglav National Park, there’s easy access to fly fishing, rock climbing, and the 750-kilometre-long Alpe Adria hiking trail, which passes through the intersection of Austria, Italy and Slovenia. 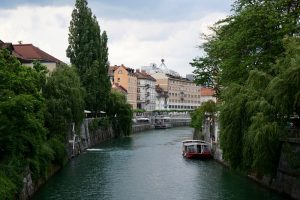 Winding down the southern side of Triglav National Park, two idyllic lakes sit in the shadow of the Alps: Lake Bled, home to a postcard-worthy castle and the dramatic Vintgar Gorge, with wooden walkways that follow the river below. Nearby is Lake Bohinj, where the 78-metre-high Slap Savica waterfall thunders. The latter sees fewer tourists and a generally more peaceful atmosphere, but you hardly have to choose since they’re just 30 minutes apart.

“Slovenia is small and easy to explore. Most of the best natural attractions are clustered close together in the western half of the country,” says Roš. “This is where cattle roam and local people tell their stories. But the best things are away from main highways and you need a car to see them.”